skip to main | skip to sidebar

Another Collector with me.

I was not the only one collecting badges wherever we went. My son collected Scout badges for his camp blanket and my daughter and I egged each other one wherever we were!  She had lots of penfriends in the days of real mail and they were often Guides.

She has lots of countries in there that I don't have....I can see, Norway, Greenland, Nevada ...she has Guide Badges where I have Brownie ones...and she even has a Chinese coin with a hole in the middle 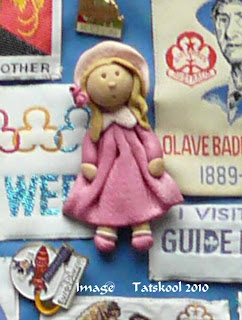 A little while ago she told me that I could have all her badges...she has moved on....or realises how much room collections takes up and how many more things she is going to want to collect. But giving it to your mother is not quite the same as throwing it away!

Maybe I will show some of my Irish Badges by way of coming to the end of this project. You have been very good to stay with me. 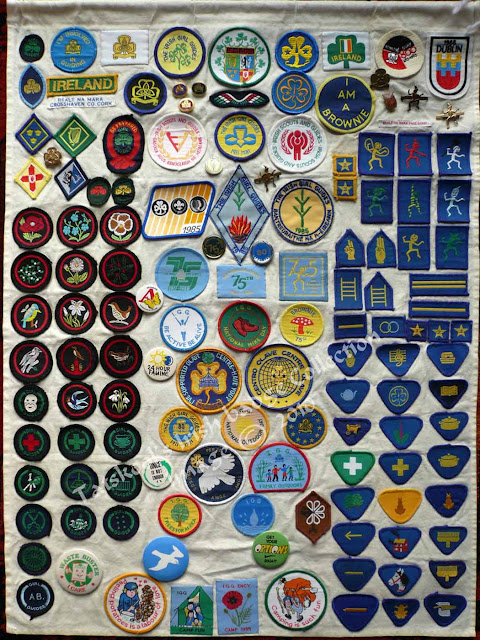 There are so many that I have had to start another banner.

Looking at these interest and group badges, they are just the same as they were in the 1950's when I would have been Brownie age. I still have the badges sewn on my Guide Blouse and they are just the same. It took us a long time to modernise, now our onterest badges actually look 'interesting' and attractive.....but they will all be sewn on to my second banner....eventually!!

I love the special commemorative badges.....let's zoom in on a few. 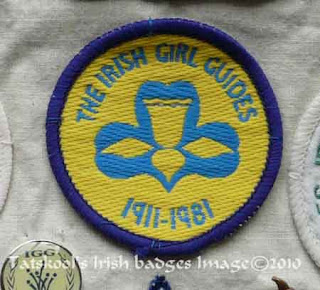 This was the first special badge a I ever saw and I was hooked!

This was our 70th Anniversary celebrations. Guiding didn't start in Ireland until 1911, most countries will be celebrating their centenary this year but ours isn't until next year,

We planted hundreds of Daffodils all over Ireland, ours were round our community center. Imagine my horror the following spring to be greeted by a little Brownies with a few daffodils clutched in her hand. "These are for you Brown Owl"

What could I say....except to explain to them all why we shouldn't pick them.

Suffice to say within a few years they were gone!! 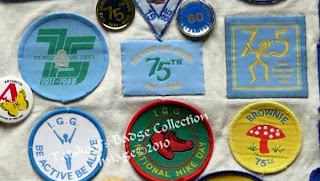 These were for our 75th Celebrations. 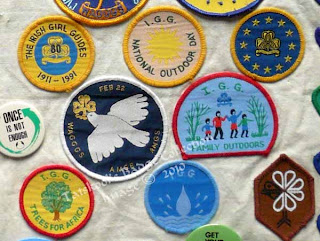 Here is our 80th Celebrations......our entry into the European union....Trees for Africa when we raised money to buy trees......Water badge when we learned how to conserve water and what it was like to live without running water....Thinking day Peace badge...and so on.

I love to read your comments, it keeps me going....but please do not use my real name in your comments or on your blog. Tatskool is my online name and I love it.